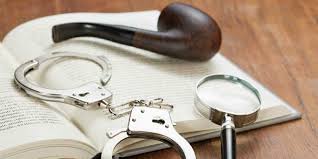 Our idea for this book club is to alternate between mysteries and thrillers when we can and try to pair mysteries when possible (a classic with a newer one), so that, if you like, you can read two each month. But you don't have to.

For those of you who would prefer to meet in person, we have a live group that meets to discuss the same book at 6:30 on the same evening, though the location varies as the members take turns hosting. This group is led by Valerie Paitoon, one of our employees. Please contact the store (435) 619-8200 for her contact information.

JANUARY – Murder on the Red River by Marcie R. Rendon (2022) | 208 pages | $9.99 – Set in the 1970s along Red River Valley, this gripping mystery follows the life of a young Ojibwe woman, Renee “Cash” Blackbear, as she struggles to come to terms with the callous murder of a Native American stranger, bringing to life the gritty, dark reality of a flawed foster care system and the oppression of indigenous people.

FEBRUARY – The Blackhouse by Carole Johnstone (January 3, 2023) | 336 pages | $28.00 – In 2019, Maggie visits a remote island in Scotland's Outer Hebrides to prove that a man was murdered there twenty-five years before. Maggie's motives are as dark as they are surprising. But she isn't prepared for the dangerous secrets and lies that are hiding at the heart of the isolated community. Or within herself. Robert Reid moved his family there in the early 1990s, driven both by hope and a terrible secret that he kept hidden for more than fifteen years. But the violent storms are returning to the islands, and what awaits him in Kilmeray can't be escaped a second time.

MARCH – The Twyford Code by Janice Hallett (1/24/23) | 336 pages | $27.00 - Forty years ago, Steven Smith found a copy of a famous children's book by disgraced author Edith Twyford, its margins full of strange markings and annotations. Severely dyslexic and wanting to know more, he took it to his remedial English teacher, Miss Iles, not realizing the chain of events that he was setting in motion. Miss Iles became convinced that the book was the key to solving a puzzle, and that a message in secret code ran through all Twyford's novels. Then Miss Iles disappeared on a class field trip, and Steven has no memory of what happened to her. Now, out of prison after a long stretch, Steven decides to investigate the mystery that has haunted him for decades. But it soon becomes clear that Edith Twyford wasn’t just a writer of forgotten children’s stories. The Twyford Code is valuable, and he isn’t the only one trying to solve it. (We'll be meeting at 2 pm MST, since the author will be joining us on our call from England.)

APRIL – Murder Your Employer: The McMasters Guide to Homicide by Rupert Holmes (February 21, 2023) | 400 pages | $28.00 – From the diabolical imagination of Edgar Award–winning novelist, playwright, and story-songwriter Rupert Holmes comes a devilish thriller with a killer concept: The McMasters Conservatory for the Applied Arts, a luxurious, clandestine college dedicated to the fine art of murder where earnest students study how best to “delete” their most deserving victim. David Goldstein (born February 24, 1947), better known as Rupert Holmes, is a British-American composer, singer-songwriter, dramatist and author.

MAY – The Writing Retreat by Julia Bartz (February 21, 2023) | 320 pages | $27.00 – Alex has all but given up on her dreams of becoming a published author when she receives a once-in-a-lifetime opportunity: attend an exclusive, month-long writing retreat at the estate of feminist horror writer Roza Vallo. Even the knowledge that Wren, her former best friend and current rival, is attending doesn’t dampen her excitement. A claustrophobic and propulsive thriller exploring the dark side of female friendships and fame, The Writing Retreat is the un-putdownable debut novel from a compelling new talent.

JULY – The Verifiers by Jane Pek (2022) | 358 pages | $17.00 – Introducing Claudia Lin: a sharp-witted amateur sleuth for the 21st century. This debut novel follows Claudia as she verifies people’s online lives, and lies, for a dating detective agency in New York City. Until a client with an unusual request goes missing. Part literary mystery, part family story, The Verifiers is a clever and incisive examination of how technology shapes our choices, and the nature of romantic love in the digital age.

AUGUST – Dirt Creek by Hayley Scrivenor (May 30, 2023) | 336 pages | $17.99 – In this debut novel, the barren landscape of regional Australia becomes the battleground upon which narratives of motherhood, friendship and trauma play out. When Esther Bianchi goes missing on her way home from school in Durton, New South Wales – nicknamed Dirt Town – the residents’ illusion of small-town safety is shattered. Her disappearance exposes the deep cracks running through the community as the investigation casts suspicion on friends and family. Esther’s best friends, Ronnie and Lewis, drift apart without her presence to ground them.

SEPTEMBER – The Hidden One by Linda Castillo (May 23, 2023) | 336 pages | $18.00 – The discovery of an Amish bishop's remains leads chief of police Kate Burkholder to unearth a chilling secret in The Hidden One, a new thriller from bestselling author Linda Castillo. Over a decade ago, beloved Amish bishop Ananias Stoltzfus disappeared without a trace. When skeletal remains showing evidence of foul play are unearthed, his disappearance becomes even more sinister.

OCTOBER – Rising Tide by Ann Cleeves (2022) | 384 pages | $27.99 – Vera Stanhope, star of ITV’s Vera, returns in the tenth novel in number one bestseller Ann Cleeves’ acclaimed series. Fifty years ago, a group of teenagers spent a weekend on Holy Island, forging a bond that has lasted a lifetime. Now, they still return every five years to celebrate their friendship and remember the friend they lost to the rising waters of the causeway at the first reunion. With the tide rising, secrets long hidden are finding their way to the surface, and Vera and the team may find themselves in more danger than they could have believed possible.

NOVEMBER – Fresh Brewed Murder by Emmeline Duncan (2021) | 240 pages | $15.95 – Master barista Sage Caplin is opening a new coffee cart in Portland, Oregon, but a killer is brewing up a world of trouble. With its entrepreneurial, 20-something protagonist, focus on a hipster-run food truck pod in Portland, Oregon, and real-world issues involving homelessness and gentrification, Fresh Brewed Murder is a trendy, updated cozy mystery that offers strong appeal to Millennial and Gen Z readers. First book in Ground Rules Mystery series.

DECEMBER – In the Woods by Tana French (2008) | 448 pages | $18.00 – Much more than a gripping police procedural, Tana French’s debut novel offers readers a stunning look into the dark recesses of the human heart and a brooding reflection on the evils that are sometimes just a breath away. As a newly anointed murder-squad detective in Dublin, Ireland, Rob Ryan solves mysteries for a living. Yet only a handful of people know that a generation earlier Ryan himself stood at the center of one of the most tantalizing unsolved cases in the recent annals of Irish crime. At the age of twelve, then known as Adam Ryan, he and two playmates wandered into a wood near his home in the town of Knocknaree. Hours after being reported missing, Adam was found unhurt but standing in a pair of blood-soaked sneakers, so deeply traumatized that he could not recall a single detail of what had happened. The two other children were never found.

Murder on the Red River (A Cash Blackbear Mystery #1) (Paperback)

The Blackhouse: A Novel (Hardcover)

The Twyford Code: A Novel (Hardcover)

Murder Your Employer: The McMasters Guide to Homicide (Hardcover)

The Writing Retreat: A Novel (Hardcover)

The Hidden One: A Novel of Suspense (Kate Burkholder #14) (Paperback)

In the Woods: A Novel (Dublin Murder Squad #1) (Paperback)