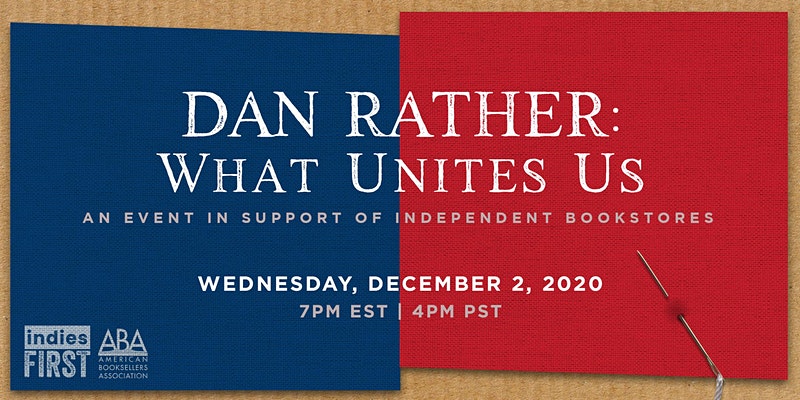 YOU CAN REGISTER FOR THIS FREE EVENT HERE. AND SCROLL DOWN TO ORDER HIS BOOK.

Join Dan Rather for an intimate and timely discussion on "What Unites Us: Reflections on Patriotism" in support of independent bookstores.

On Wednesday, December 2, at 7 pm ET / 4 pm PT, join Dan Rather for a discussion on his book What Unites Us: Reflections on Patriotism.

“In my many travels over the years, I have often sought out independent bookstores because you can learn a lot about a place from its bookstores,” Rather said. “These are often idiosyncratic and surprising places, the kinds of uniquely local institutions that tie communities together.”

With a storied career that has spanned more than six decades, Rather has earned his place as one of the world’s best-known journalists. In his latest book, Rather reflects on patriotism and what brings Americans together at this critical moment in our national identity. He looks to the book’s title not as a question, but as a plan of action, a path forward for the country.

What Unites Us: Reflections on Patriotism (Paperback)