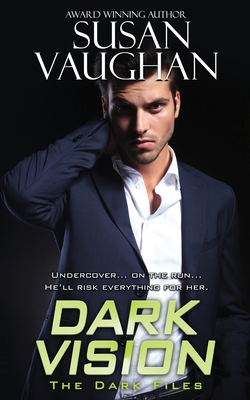 By Susan Vaughan
Email or call for price

NEW COVER Part of a romantic suspense mystery series, but a stand-alone novel with its own conclusion. No cliff-hangers. He once betrayed her, but now he's undercover in her film crew. When a bomb explodes, embassy security accuses them. On the run, they burn for answers and for each other. Undercover...
Shrapnel damage to DARK Officer Matt Leoni's eye could cost him his vision and his only family, DARK. Chafing at desk duty, he jumps at a gig to find a traitor in the embassy of Modena. But Matt's undercover role means working with the woman who believes he betrayed her five years ago. Worse, Matt still wants her and has orders to spy on her.
On the run...
Despite Nadia's anger at having Matt in her film crew, she can't deny her renewed attraction. When rebels set off an explosion in the crown princess's office, embassy security believe Nadia and Matt are the bombers. In the smoke and confusion, Matt pulls her to safety and they flee into D.C. streets.
He'll risk everything for her.
Unable to rely on anyone, Matt is determined to protect Nadia and find answers. As they work together, trust grows and leads to passion, but both harbor secrets that could tear them apart. A bold plan to foil the traitor's assassination plot could place Nadia in the crosshairs, and time is running out.

Susan Vaughan is a multi-published and award-winning author. Her books have won the Golden Leaf, More Than Magic, and Write Touch Readers' Award and been a finalist for the Booksellers' Best and Daphne du Maurier awards. A former teacher, she's a West Virginia native, but she and her husband have lived in the Mid-Coast area of Maine for many years. Find her at www.susanvaughan.com or on Facebook at www.facebook.com/SusanVaughanBooks or on Twitter @SHVaughan.