An Echo in the Bone (Outlander) (Prebound) 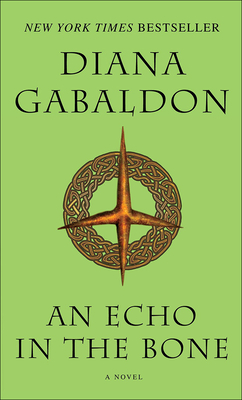 By Diana Gabaldon
Email or call for price.
Out of Print

In this epic of imagination, time travel, and adventure, Diana Gabaldon continues the riveting story begun in "Outlander."
Jamie Fraser is an eighteenth-century Highlander, an ex-Jacobite traitor, and a reluctant rebel in the American Revolution. His wife, Claire Randall Fraser, is a surgeon--from the twentieth century. What she knows of the future compels him to fight. What she doesn't know may kill them both.
With one foot in America and one foot in Scotland, Jamie and Claire's adventure spans the Revolution, from sea battles to printshops, as their paths cross with historical figures from Benjamin Franklin to Benedict Arnold.
Meanwhile, in the relative safety of the twentieth century, their daughter, Brianna, and her husband experience the unfolding drama of the Revolutionary War through Claire's letters. But the letters can't warn them of the threat that's rising out of the past to overshadow their family.
Diana Gabaldon's sweeping Outlander saga reaches new heights in "An Echo in the Bone.

Diana Gabaldon is the" New York Times" bestselling author of the wildly popular Outlander novels--"Outlander," "Dragonfly in Amber," "Voyager," "Drums of Autumn," "The Fiery Cross," ""and "A Breath of Snow and Ashes" (for which she won a Quill Award and the Corine International Book Prize)--as well as one work of nonfiction, "The Outlandish Companion"; the Outlander graphic novel, "The Exile"; and the bestselling series featuring Lord John Grey, a character she introduced in "Voyager." She lives in Scottsdale, Arizona.