The Thing About Love (Paperback) 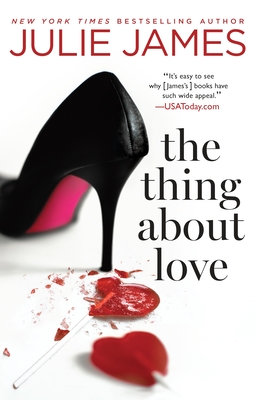 By Julie James
Email or call for price

The New York Times bestselling author of Suddenly One Summer blows the covers of two FBI agents who can’t hide who they are from each other...

FBI agents Jessica Harlow and John Shepherd have a past. The former lawyer and cocky Army Ranger clashed during their training at Quantico and gladly went their separate ways after graduating from the Academy. Six years later, the last thing either of them expects is to be assigned to work as partners in a high-profile undercover sting.

For both of them, being paired with an old rival couldn’t come at a worse time. Recently divorced from a Hollywood producer and looking for a fresh start, Jessica is eager to prove herself at her new field office. And John is just one case away from his dream assignment to the FBI’s elite Hostage Rescue Team. In order to nail a corrupt Florida politician, they’ll have to find a way to work together—a task that becomes even trickier when they’re forced to hole up at a romantic beachfront resort as part of the investigation. Suddenly, the heat behind their nonstop sparring threatens to make the job a lot more complicated...

After graduating from law school, New York Times bestselling author Julie James clerked for the United States Court of Appeals. She then practiced law with one of the nation’s largest firms for several years until she began writing screenplays. After Hollywood producers optioned two of her scripts, she decided to leave the practice of law to write full-time. Julie’s books have been listed on the American Library Association’s Reading List for Top Genre Novels and Booklist’s Top 10 Romances of the Year, and have been featured as one of Cosmopolitan magazine’s Red Hot Reads. Julie’s books have been translated into seventeen languages, and her most recent novels are The Thing About Love, Suddenly One Summer, It Happened One Wedding, Love Irresistibly, and About That Night.

Praise for The Thing About Love

Named One of the Best Love Stories of 2017 by NPR

A Goodreads Highly Anticipated Book of 2017

“A sexy and thrilling standalone[.]”—Goodreads

“James’ dialogue and characters sparkle with intelligence and humor, and there is plenty of action.”—Booklist

“James’ knack for witty, snappy banter and excellent story plotting is on full display in her latest novel.”—RT Book Reviews

“I had the best time reading this book!”—Smart Bitches, Trashy Books

“The Thing About Love is a delight.”—USAToday.com


Praise for the novels of Julie James

“It's easy to see why [James'] books have such a wide appeal.”—USAToday.com

“A tantalizing dessert—a delicious, delightful read that all hopeless romantics will enjoy.”—Chicago Sun-Times